A shipyard like Saffier Maritiem does not just happen out of the blue. For its origins we have to go back to the mid fifties. With the help of his father, Richard Hennevanger bought his first boat, the Rainbow, at the age of twelve. In fact, it could barely be called a boat, because the Rainbow looked more or less like a pile of wreckage. Nonetheless, Richard and his father believed in this boat and after a lot of blood, sweat, and tears they turned it into a beautiful boat, truly a rainbow! 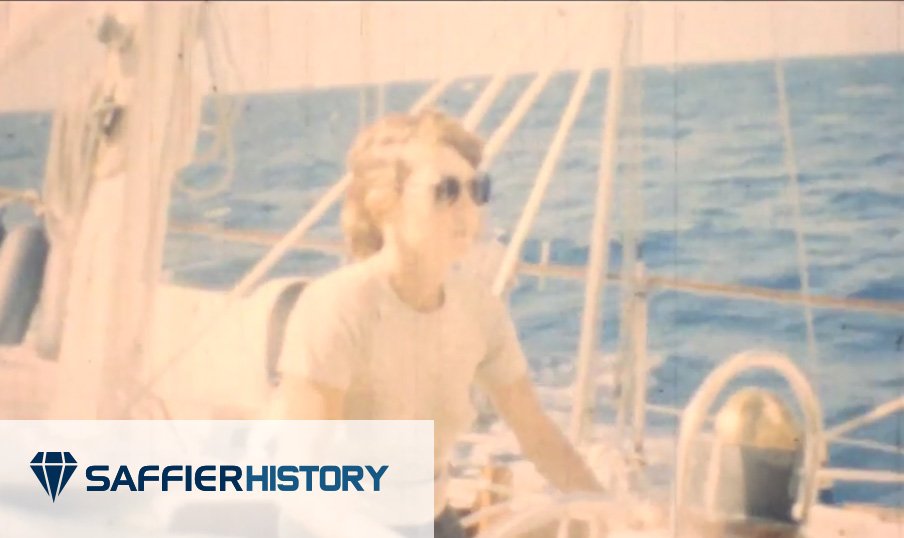 The IJmuiden estuary one day, they were spotted by a coaster. The captain of the coaster fell in love with the Rainbow and bought the boat on the spot. The Rainbow was hoisted aboard; father and son were paid and brought ashore. Richard had caught the sailing virus and would never be cured. After his service in 1961, he decided to move to Australia with his wife. Soon after, Richard Hennevanger started his own shipyard.

It was a blossoming business and in the mid-60s he had fifteen people working there who produced approximately 40 yachts per year. The sailing boat Santana was a cabin sailing yacht of 9.50 and 11 meters in size. In the meantime, he often worked with designers on special yachts that were over 12 meters in length.

He was particularly inspired by Bob Miller who would later change his name to Ben Lexcen (and who subsequently created the famous Australia 2 with a winged keel, with which he won the America cup for the first time as a non-American). Together with Bob Miller they designed a new boat with which he wanted to fulfill his next dream: to sail around the world with his family.

Sail around the world

Back in Holland, Richard started a new shipyard. Dennis was being trained as a mate while Dean studied naval engineering. Dennis also completely immersed himself in a new water sport: windsurfing. Between 1980 and 1985 he won the Dutch Championship three times and the European Surfing Championship twice. It was an excellent way of showcasing his talent. After Dean had finished his training, he started working for his father and immediately began to build his first boat. The 9 meter-long catamaran named “Hotlegs” Dee was sailing the waters of the IJsselmeer one year later where Dean scared the living daylights out of many a sailor by screaming past at over 20 knots! When his surfing madness had abated, Dennis, who still had not had enough of travelling, worked as captain on various large yachts on the Mediterranean sea.

In 1999 Dennis showed a water sports journalist what the Saffier 6.50 was really capable of. With a south-westerly force 7 wind they crossed over from IJmuiden to Lowestoft, a distance of 110 miles. The Saffier reached the other shore without any problem, thus proving her seaworthiness. In 2001 the two brothers decided it was time for a follow-up. Naturally father had to create the new design. A year later the Saffier 8.00 became a reality. The Hennevanger experience can be recognized in this vessel as well. The media also noticed that and in 2003 the Saffier 8.00 was nominated as Boat of the Year. With only a difference of 1 point from the winner (max fun35) she was placed second. Soon afterwards the Saffier 8.00 was nominated as European Boat of the Year 2004. Unfortunately the Hennevangers had to pass up this opportunity due to numerous orders and they clearly chose to put their customers first. At the end of 2004 they nonetheless started yet another new design: the Saffier 32 ft. Boats were already being bought from the drawings and building could commence forthwith. In the meantime the 100th Saffier 6.50 left the shipyard in 2005. The Saffier was slowly gaining international recognition and the first Saffiers were being delivered all over Europe. Saffiers were also sold in America and the Caribbean for the first time.

While the sales of Saffier Yachts was growing, the shipyard, that in the meantime had been named Saffier Yachts, remained loyal to one business aspect. Building all the yachts to the highest standards in the market and designing new models. In December 2005, the first Saffier 32 was launched, followed by a trial period of six weeks until the Hennevanger brothers where satisfied.

Saffier Se 26
In the fall of 2008, a new design was ready, the Saffier Se 26 open daysailer, this time designed by the Hennevanger brothers . This Yacht will proof to be a turning point for Saffier Yachts. From day one the Se 26 attracts huge media attention, resulting in winning the highly prestigious European Yacht of the Year contest 2009. The revolutionary design, which enables anyone to sail comfortable singlehanded attracts customers who realize the potential of this daysailer from the very first drawings.

Effortlessly sailing is the key for lots of people and the Se 26 provides all of this. Together with her stunning looks and performance she is a total hit. For the yard, this means a substantial growth. Internationally they get more and more foot on the ground and the 2 brothers manage to keep to their first ever promise: build their Saffiers the best way they can.

Saffier Se 23
Competing in the Yacht of the Year 2011 the Saffier Se 23 won the title by unanimous votes of all international judges. She was one of the very first ,,green” boats with artificial teak decking and electric propulsion. Combining this with sweet lines and good performance she was a bench mark for the following model; the Se 33.

Saffier Se 33 Ultimate Daysailer
The next step in the history of Saffier Yachts is a big one. The Saffier Se 33 UD saw light for the first time in 2013. This revolutionary design was completely new in the world. The two steering wheels was something which was not seen on daysailers yet. The design was made to ensure that you could walk easily from the helmsman position forward and back. Instead of climbing around the wheel over deck. This model was another hit on the market, with over 70 pieces build nowadays.

Saffier Sc 8m Cabin
The 8m cabin was set in the market as the ultimate 8m boat to enjoy a longer period on board. This meant that the focus was set on a maximum of interior while not destroying those beautiful classic lines. Combining seaworthiness with a depth of only 1.03m, the Sc 8m Cabin truly combines  a shallow lake and ocean sailing all in one boat.

Saffier Sc 6.50 Cruise
In 2016 the Sc 6.50 Cruise was redesigned. Dennis and Dean combined the latest technology and design with the classic hull lines of the Sc 6.50. With this upgrade the boat complies to the latest standard and is ready for a lot more years to come.

Saffier Se 37 Lounge
In 2017 it was time to design the new flagship for Saffier Yachts. The Se 37 Lounge is a huge step forward in style, design, space and performance in the world of daysailers. Saffier Yachts created a very large uncluttered cockpit. The big lounge area with the steeringwheels in front of the cockpit enables friends and family to enjoy the cockpit without to worry about any lines getting in the way.

Meanwhile the helmsman has a much better connection with the people in the cockpit, while on the same time having a better central position to see trim and set his sails and a better view on the surrounding waters.

Saffier Se 27 Leisure
Saffier Yachts felt from market that we needed a high performance yet easy to use daysailer in the 8 meter range.  The Saffier Se 27 saw light in Dusseldorf 2019 and draw crowds to the stand. The Se 27 Leisure is a bullseye in the market. She has become European Yacht of the Year in 2021 and Saffier Yachts sold 80 boats in just over one year after her launch.

Saffier Se 33 life
In 2021, Saffier Yachts will launch a new design replacing the Se 33 UD.  Based on the powerful hull lines  of the Se 27 Leisure and Se 37 Lounge she will combine best of both worlds. Speed, easy handling, huge cockpit and a seriously nice interior to enjoy a stay over comfortably.